The kidnapped victims were rescued by the operatives of Operation Hadarin Daji of the Nigerian Army along Bimasa forest between Sokoto and Zamfara State Borders  on Sunday evening.

Speaking at the  Handing over of the victims, The Brigade Commander 1Brigade Nigerian Army Gusau Brigadier General O. M Bello said, the operatives of Operarion Hadarin Daji under the force operational Based situated at Anka Local Government Area of Zamfara state have rescued 22 abductees along Bimasa forest who were  abducted by armed bandits. 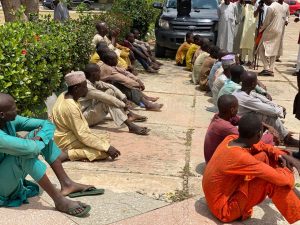 Brigadier General O. M Bello added that, the rescue effort was part of the ongoing military strategic operation aimed at securing the state from the activities of the bandits who have been terrorizing innocent souls in the state for years.

According to him military 17 out of the 22 abductees are natives  of Sokoto state while the remaining 5 are from Anka, Bukkuyum and Bakura Local government areas of Zamfara State.

Recieving the abductees, Governor Bello Muhammad Matawallen Maradun represented by the state commissioner for security and Home Affairs Alhaji Abubakar Muhammad Dauran  commended the efforts of the joint security operatives for the continued surveillance and rescue of the state indegenes abducted by the bandits.

The Governor reaffirmed his Administration’s committments to support the security operatives as they worked toward restoring peace and tranquility in the state.

Governor Matawalle also reaffirmed the position of the state Government of using stick and carrot approach in its fight against banditry, pointing out that those who wanted peace will see peace while those unrepented ones will be dealt with decisively.

It could be recalled that yesterday Zamfara state government reunited 16 abductees who were kidnapped along Anka forest with their families.