Court restrains INEC from issuing Certificate of Return to Ararume 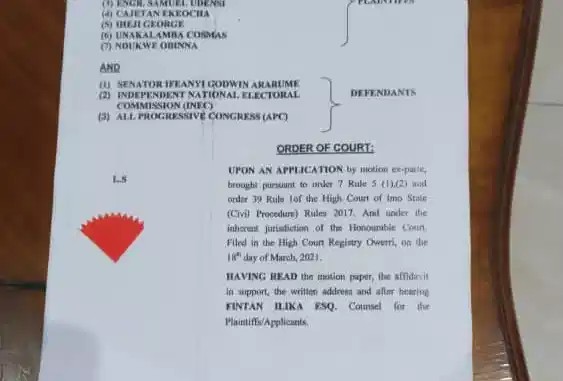 Senator Ifeanyi Ararume’s fresh hopes to be declared winner of the December 5th Imo North bye-election were dashed on Thursday day following a restraining order by a High Court in Owerri.
Presiding Justice E.O. Agada issued an interim order restraining the Independent National Electoral Commission (INEC) from recognising Senator Ararume as the winner of the bye-election.
The suit brought by the All Progressive Grand Alliance  (APGA) and some of its members was brought pursuant to order 7 Rule 5 (1) , (2) and Order 39 Rule 1 of the High Court of Imo Court (Civil Procedure) Rules 2017.
Justice Agada further restrained INEC from issuing Ararume with Certificate of Return or any other instrument in his favour pending the hearing and determination of the Motion on Notice in the suit.
Ararume had earlier in the day obtained a court order issued by Justice Taiwo Taiwo of the Federal High Abuja declaring him as the authentic APC candidate for the December 5, 2020, Imo North Senatorial bye-election.
Thereafter, Justice Taiwo ordered INEC to issue a certificate of return to Ararume within 72 hours based on the INEC result declaring APC winner of the bye election.
Frank Ibezim had filed a notice of appeal and stay of execution at the appeal court challenging Taiwo’s judgement.
He decried the judgement declaring Ararume as the APC candidate as a travesty of justice since the Supreme Court has already decided the issue of who the APC candidate for the Imo North Senatorial bye election in his favour.
He expressed the view that it is a settled matter of law that Judges do not adjudicate further any case already before an appellate court.
On the issue of the High court disqualifying him as a candidate, Ibezim said he had already appealed the ruling before the Supreme Court.
He opined that Justice Taiwo ought to have exercised discretion and allowed the apex court to finally decide on the matter before arriving at a decision.