Singer Tiwa Savage has acquired a huge tattoo on her right arm officially joining the league of celebrities who have inked their bodies.
The Koroba singer, who has been in Beverly Hills, Califonia for a while, showed the design of her new tattoo in a recent photo she took.
The tattoo covers her arm.
Taking to her Instagram page, the 41-year-old mother of one shared a photo of her huge tattoo and video showing her sitting on a chair as the tattoo artist did his job on her arm.
Tiwa described herself as the number one African bad girl.
The caption that accompanies her post reads; “Also known as 1ABG.”

The post of her eye-catching art on Instagram has gathered comments from celebrities and fans on social media.
official2baba wrote: “#1 AFRICAN BAD GYAL.”
oreziworldwide tweeted: “No 1 African Bad Girl.”
moetabebe wrote: “Ayyy you did it!!!!!… looks really good.”
stefflondon stated: “Ur good cuz I couldn’t finish mine.”
iam_slimcase said: “Jayyyyy!!!!!!! Jam jam her self.”
dammytwaitch tweeted: “One and Only.”
gene.vieve560 wrote: “I want draw tattoo just like tiwa own but my parents no gree me.”
bellaalubo stated: “damn.” 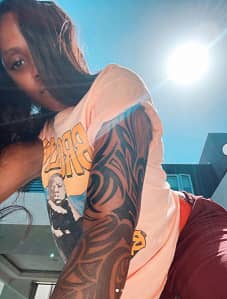