Borno Governor Babagana Zulum has reunited an abducted Chibok girl with her mother.
In a brief ceremony at the Borno Government House on Saturday evening, Zulum noted the use of only force in the terrorism war will not achieve the result needed.
Ruth Ngladar Pogu, now a Muslim, was dressed in a purple hijab during the ceremony.
She and her husband were reported to have been returned by the Federal Government’s Operation Safe Corridor.

Zulum said this was made possible through collaboration between the State Government, Nigerian Army and sister agencies.
“I am extremely excited both as Borno’s Governor and father of all sons and daughters of the state, and also as a father to daughters. I know the feeling of families of those still under captivity but we have to remain hopeful especially with today’s development,” the Governor said.
Chairman of the Chibok Parents Association Yakubu Nkeki confirmed the girl as one of the missing students.
The mother, who is seeing her daughter for the first time in seven years, expressed gratitude to God and government for making it possible for her return.

Ruth was sighted holding her two children. While the boy is about three years old, the girl cannot be more than one.
Ruth Ngladar Pogu is one of the over 200 schoolgirls abducted seven years ago at a Government Secondary School in Chibok came out on July 28, 2021 around Bama axis. 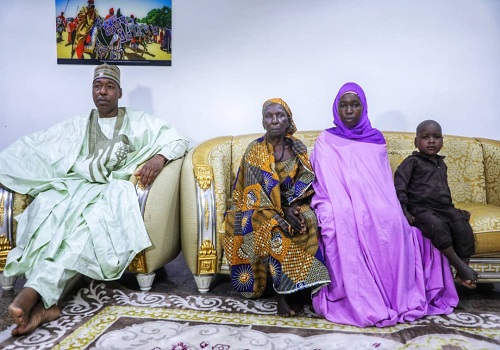