Since April 22, when the Lagos State Police Command arrested him for allegedly sexually assaulting a 14-year-old foster daughter of a popular comedian, Princess, Baba Ijesha has constantly made headlines.

Baba Ijesha, who was arraigned on June 24, is being charged with six counts bordering on the defilement of a minor.

The defence counsel, however, presented a letter requesting for an adjustment of the case owing to the fact that Adesina Ogunlana, Baba Ijesha’s lead counsel was absent in court.

However, the Lagos State Director of Public Prosecution (DPP), Olayinka Adeyemi, who led the prosecution for the state, insisted that the court should continue with the case.

She argued that the matter at hand is a criminal case and both counsels were given updates on the date of the hearing prior to Tuesday’s court sitting.

Oluwatoyin Taiwo, the presiding judge, insisted that the court would hear the witnesses while the cross-examinations would take place on a different date.

Baba Ijesha stormed the court with four men who shielded him from the press interviews and from the crowd that gathered in the court premises.

Princess on the other hand came in the company of actress, Iyabo Ojo, comedian, Koffi and four lawyers from the DPP. 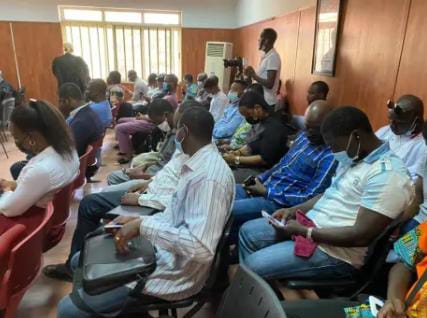 Forensic Interview
The prosecution counsel presented a forensic witness to the court, conducted by Olabisi Ajayi-Kayode.

Ms Ajayi-Kayode is a forensic interview specialist, a legal practitioner and an executive Director of Cece Yara child care foundation.

She said she has over 25 experience in child forensic interviews and has worked in different reputable organisations.

She said the survivor gave a tenacious and bold report.

According to her, the survivor, in an interview, told her that Baba Ijesha allegedly started engaging her in sexual activities when she was 7-year-old.

She also recounted an experience at a park where fruits are sold, where the accused (Baba Ijesha) inserted his car key into her vagina.

Immediately she said this, Princess became very emotional and walked out of the court crying. She would later come back into the court.

Baba Ijesha, who donned a blue face cap and black nose mask stood in the witness dock while the cross-examination lasted.

The Court
The Court
He was not interrogated by the court because his counsel was absent.

The child forensic expert also presented a flash drive, containing a video coverage of the interview with the survivor.

The judge assured the court that the video would be displayed at the next setting of the court on the case.

Upon the request letter of the defence counsel, the judge chose October 20 and 21 for subsequent hearing of the case to more witnesses and cross-examination of the case.

Baba Ijesha had, however, employed the services of two senior advocates of Nigeria – Dada Awosika and Babatunde Ogala, and other lawyers to defend him.