An attempt by Nigeria-born Israel Adesanya to become a double champion in the UFC was dashed early Sunday morning.

Jan Blachowicz beat the previously undefeated Adesanya by unanimous decision (49-46, 49-45, 49-45) to retain his light heavyweight title in the main event of UFC 259.

The loss is Adesanya’s first in his professional MMA career and brings his record to 20-1.

He remains unbeaten at middleweight where he is the current UFC champion.

Blachowicz had a 107-78 edge in significant strikes, outlanding Adesanya in every round, including 28-12 in the fifth. Two judges scored the final round 10-8 for Blachowicz.

Blachowicz (28-8) has won five in a row. He claimed the UFC light heavyweight title in beating Dominick Reyes by second-round TKO at UFC 253 in September.

Adesanya (20-1), a former champion kickboxer, won his first nine fights in the UFC before Saturday. 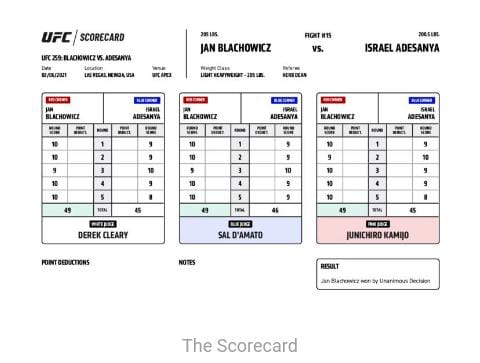