Ace Nollywood Actor, Chiwetalu Agu, who has been in Army and DSS detention for nearly one week, for allegedly wearing the Biafran clothes and inciting members of the public,has been released by the DSS.
He was first arrested at Upper- Iweka ,Onitsha, Anambra state, for adorning an outfit which the Army personnel said reflected the colours of the Biafran flag.

Mr Agu had argued then that he had committed no known offence, as he was merely wearing an attire with the rising sun and distributing ten thousand naira worth of bread he had bought, to the  poor and hungry

Agu was later handed over to the DSS by the Army, which immediately whisked him off to Abuja. He was released this evening after intervention by Mike Ozekhome ‘s chambers which had been briefed by the Nigerian Guild of Actors to take up Agu’ s defence probono. Chief Ozekhome had been briefed by Chief Emeka Rollas, Steve Eboh, and Waski, on behalf of Nigerian Guild of Actors, to step into the matter, and effect Agu’s release. Several interactions were held by the chambers with the DSS operatives, who were however very civil and cooperative. Agu was released this evening to Eboh and Monalisa Chinda ( Director of Media, Actors Guild of Nigeria), by the DSS at their headquarters in Abuja, after a careful search on his phones showed nothing incriminating.

Ecstatic Chiwetalu Agu in company of Steve Eboh, later paid a courtesy call on Chief Mike Ozekhome, SAN and his team of lawyers this evening, at his Abuja Chambers, to thank them and express their gratitude for Agu’s release. Some moments of excitement.. 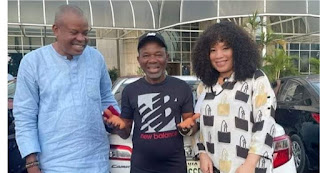 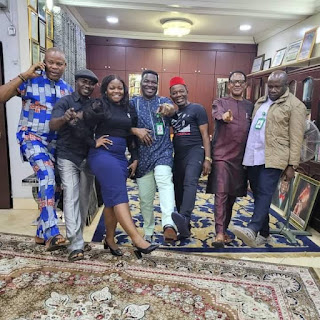