by dgovscoops
in Business, Nation
0 0
0

As part of concerted efforts to mitigate the impact of flood on the soil, the Nigeria Institute of Soil Science (NISS) has urged farmers and extension workers to adopt climate-smart agriculture technologies to boost crop production to feed the growing global population. 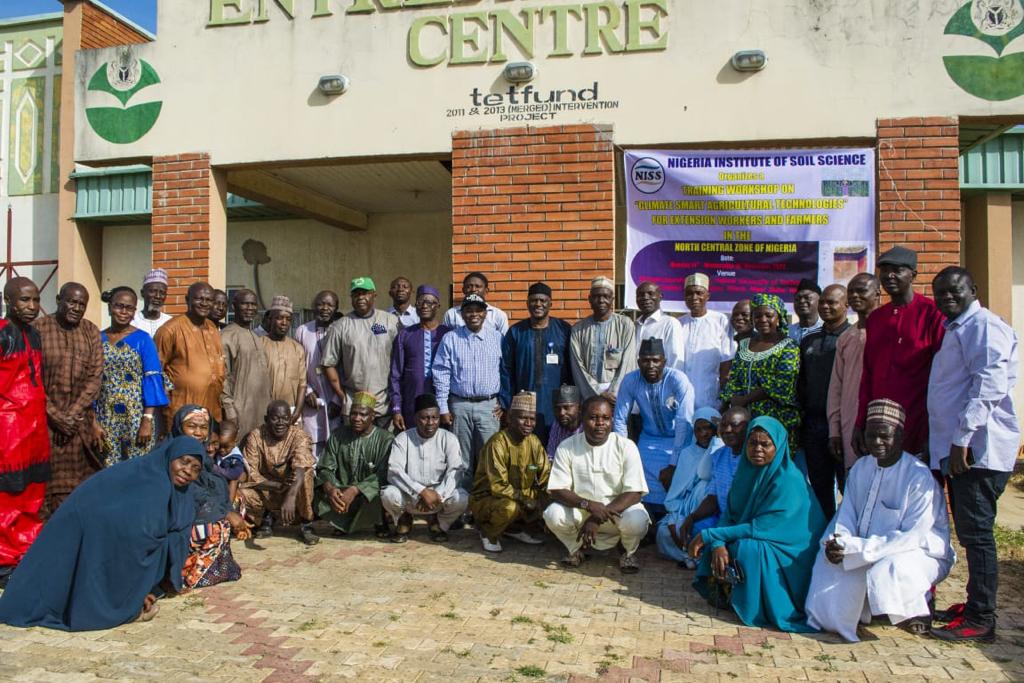 The hands-on training which is the fourth of its kind and second under the same thematic foci this year, “Climate Smart Agricultural Technologies” For Sustainable Crop Production”, took place at the Entrepreneurship Centre, Federal University of Technology, Minna.

Speaking at the workshop, the Zonal Coordinator, NISS North Central Zone, Prof. Akim Osunde, FSSSN, RSS, stated that the continuous increase in world population which is currently estimated at 8 billion with 9 billion projections by 2025 would demand an exponential growth in world agriculture output over the coming decades, adding that to feed the growing global population, agriculture would need to undergo a significant transformation.

“FAO estimates that global agricultural production will need to increase by about 70%. Climate change adds extra challenges in reaching this goal, especially in Nigeria where food insecurity and poverty are prevalent. Also, the damaging impact of the extensive flood that ravaged farmlands in twenty-three (23) states of the country today gives credence to the fact that climate change is real.

Consequently, farmers who suffered the most due to crop and farmland losses are expected to be in the frontline, contributing towards a safer environment by engaging in climate-smart agricultural practices”, he disclosed.

Prof. Osunde noted that the Nigerian Institute of Soil Science (NISS) deemed it necessary to organize the workshop for selected extension workers and representatives of organized farmers’ groups at zonal levels to address the issue of Climate Change and Climate Smart Agricultural Technologies and to include a special subject matter topic on “Flooding and Post Flooding Soil Management” which was not included in a similar NISS organized training workshop that held in March 2022.

Furthermore, he posited that the training would train the farmers on how to plant the right crops and use the right methods, ensure food and agriculture returns to areas affected by the floods, especially those areas where food production is their mainstay of livelihood while advising farmers and extension workers to adopt dry season farming to move from food security to food sovereignty.

Speaking earlier while delivering the workshop keynote address, the Vice-Chancellor of the Federal University of Technology, Minna, Prof. Abdullahi Bala, FSSSN, stated that the training could not have come at a better time, as it will give farmers and extension workers the requisite knowledge on the best agricultural practices to mitigate the damage done by flooding on the soil.

Prof. Bala maintained that agriculture is both a culprit and a victim of climate change. This looks like a double-edged sword he said, as many of our current agricultural practices (land use change, cultivation methods, deforestation, bush burning, land clearing) damage the environment and are the major drivers of greenhouse gas emissions and at the same time, farmers bear the brunt of some of the adverse effect of climate change such as drought as in the horn of Africa and the recent flooding in Nigeria.

Prof. Bala underscored the need for stakeholders to have a better understanding of climate change and climate-smart agriculture to enhance crop production.

Farmers at the training said that the recent flood that destroyed farmlands across the country has cost them to varying degrees, but they were optimistic that the training would help them make up for what has been lost.

A total of 35 Participants attended the workshop comprising two (2) Extension Agents and three (3) Farmers drawn from each of the States of Niger, Kogi, Kwara, Nasarawa, Benue, Plateau, and the Federal Capital Territory (FCT).

Similar training has been conducted in the other five geopolitical zones of the country.